Some refiners have made major unit modifications, such as adding alkylation capacity for butane conversion. Others have debottlenecked existing fractionation equipment, thus increasing butane removal. 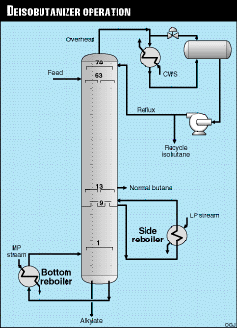 As shown in Figure 1, the stabilizer removed butane and lighter material from the C5+ gasoline blendstock, LSR. The overhead from the LSR stabilizer was sent to a depropanizer. The depropanizer produced an overhead propane product for sale and a normal butane stream which was routed to a Butamer unit for isomerization.

The Butamer unit isomerizes normal butane to isobutane, which is fed to the alkylation unit. The Butamer handles only limited amounts of C5s to prevent catalyst degradation.

To meet gasoline blending requirements, the LSR RVP specification was lowered to 8.5-9.0 psi from 9.0-9.5 psi. The overhead specification for the LSR stabilizer remained minimum C5+.

The operations personnel tried changing various operating parameters to meet both the overhead and bottoms specifications. Unfortunately, when it became evident that the tower could not meet both specifications simultaneously, an engineering study was performed.

An existing simulation of the tower was revised to match the plant vapor pressure. Case 2 in Table 1 shows the simulation results.

The Case 2 simulation predicted 0.87 liquid volume % (LV %) butane in the bottom LSR to match the RVP observed in the plant. Case 3 increased the reflux and reboiler rates to reduce the LSR butane concentration and, hence, vapor pressure.

Case 3 indicates a bottoms RVP of 9.0, which just meets the upper limit of the new specification. The calculated butane content was 0.19 LV %.

In Case 4, the bottom LSR was virtually butane free, yet the bottom RVP dropped to only 8.9 psi. All of the extra reboiler duty and reflux reduced the bottoms RVP by only 0.1 psi compared to Case 3.

Case 5 shows what would have been required to meet the lower RVP target of 8.5. The C5+ content in the LSR overhead would have to be increased to 6.24 LV % to reduce the bottoms RVP to 8.5.

In this case, the RVP reduction would have come not from eliminating butane from the LSR, but by rejecting C5+ material to the overhead. The additional overhead C5+ not only would have violated the Butamer feed limit, but also would have done nothing to reduce the vapor pressure of the gasoline pool.

Because the refinery did not have a C7 conversion unit, the C5s in the refinery’s crude would have ended up in the gasoline blending pool no matter what processing route the refiner took.

A slight adjustment in the LSR RVP target, returning it to the 9.0-9.5 psi specification, allowed good separation in the LSR stabilizer. The gasoline vapor pressure specification had to be met by removing additional butane in other units. 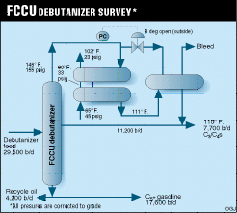 The overhead product is a mixture of olefinic and paraffinic C3 and C4s. The bottom product is FCCU gasoline used as a gasoline blendstock.


The overhead condensing capacity limited the debutanizer operation. The pressure-control valve on the hot vapor bypass operated nearly closed. Attempts to increase the reflux rate only resulted in the valve closing and the tower pressure increasing. 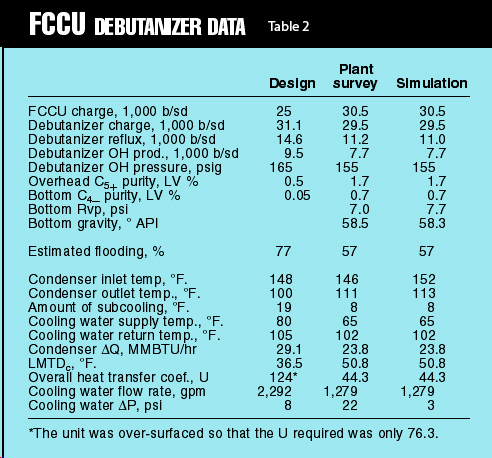 The maximum reflux rate of 11,200 b/sd was 23% less than design. The calculated overhead condenser duty was only 23.8 MMBTU/hr, compared to the design duty of 29.1 MMBTU/hr.

The calculated overall heat-transfer coefficient was only 44.3, compared to the design value of 124. Obviously, the overhead system was not performing as designed.

The FCCU gasoline accounted for a large percentage of the refinery’s gasoline pool. For this reason, the debutanizer problem made meeting the refinery’s finished gasoline specifications difficult.

Since FCCU capacity was the major refinery limit, the debutanizer overhead condensing limit had a large, detrimental impact on refinery profitability. The importance of this operating bottleneck led to further analysis.

All evidence of the poor condenser operation pointed to tube-side fouling caused by the cooling water. The heat-transfer coefficient was much lower than design, indicating fouling on either the tube or shell side of the exchanger.

The cooling water rate was below design, despite the fact that the exchangers had 22 psi available pressure drop, as compared to only 8 psi in the original design.

The effect of fouling in the overhead condenser on the bottoms RVP is shown in Figure 3. The base case operation, reflecting survey conditions, is shown at the lower left.

The simulation indicates that the minimum attainable RVP is 7.3 psi, with essentially no C4- in the bottoms. The other data points on the same line indicate the increase in gasoline RVP resulting from reduction of the overhead condenser heat-transfer coefficient.

All of the points below the dashed line, denoting the survey U of 44, represent feasible operating points. The top curve estimates the effect of higher cooling-water temperatures and, hence, vapor pressures during the summer.

Almost all of the points on the line indicating summer operation are above the dashed line, indicating that operation is unfeasible with the fouled exchangers.

The plot clearly shows that the heat-transfer coefficient was below design. The curve for the current winter operation indicates that the RVP could be reduced only marginally by removing all of the C4- fraction.

Attempts at on-line cleaning were unsuccessful. A shutdown was required to clean the bundles.

The existing bundles indicated severe tube-side fouling, as was expected. Upon start-up, the condenser operation returned to design conditions and the debutanizer no longer limited unit and refinery operation.

The new bundles reduce the exchanger outlet temperature to less than 70° F, compared to 111° F before the bundles were changed. The increased cooling allows the RVP specification of 6.5-7.0 psi to be met, even during summer.

The value of debottlenecking relatively minor equipment is illustrated in the case of another LSR stabilizer.

This stabilizer was in the same service as the one discussed previously. Although the refinery configuration was slightly different, the same products and desired separations applied.

The stabilizer was undersized for the service, as the upstream equipment had been debottlenecked to allow greater charge rates. The undersized stabilizer led to high C4- concentrations in the bottoms and high C5+ losses in the overhead.

Case 1 indicates that, despite allowing almost 14 LV % of C5+ material into the overhead product, the lowest attainable C4- concentration in the bottoms was 3.9 LV %. This high C4- content resulted in vapor pressures of 12 psi and greater.

The high C4- concentration in the stabilized LSR was causing significant vapor pressure blending problems. A study was initiated to determine the best means of reducing vapor pressure with only minor equipment modifications.

Because the bottom portion of the tower was limiting, the study concentrated on increasing the temperature to which the feed is preheated. The tower had a feed/bottoms exchanger, but the feed still entered the column significantly subcooled.

The subcooling of the feed contributed to the bottom tray flooding limit. The subcooled feed had to be heated up to its bubble point using the heat supplied by the reboiler. Using the reboiler heat increased the traffic in the loaded bottom section of the tower.

Alternatively, additional feed preheating could be added externally to the tower, which would not increase the tower loadings. This higher preheating temperature could be achieved easily with another small feed/bottom exchanger.

Cases 2 and 3 in Table 3 illustrate the significant debottlenecking effect of additional feed preheat. Raising the feed preheating to 200° F reduced the amount of butanes in the bottoms by more than half. The vapor pressure decreased accordingly, from 12.1 psi in Case 1 to 11.1 psi in Case 2.

Fig. 4 shows the effect of the additional feed preheating on the bottoms RVP.

The refiner chose to increase the feed temperature to 200° F while the column separation was still not good, even at the higher preheating levels, the reduction in bottoms RVP was significant. (An RVP of 11.1 psi was achieved).

Additional feed preheating is not a panacea for all column debottlenecking. Preheating usually increases capacity only if the columns have subcooled feeds and are limited by reboiler duty or by tray flooding below the feed.

Additional feed preheating also reduces the energy efficiency of the tower. For a given amount of feed and reboiler duty, better separation is achieved if more duty is applied to the reboiler. If additional preheating is available through feed/bottoms exchange, however, the energy debit may become moot if the bottom heat were rejected against a utility.

As with any debottlenecking effort, all of the ancillary equipment must be checked. Additional feed preheating increases the loads on all of the equipment above the feed tray. Other debottlenecking options, such as high-capacity trays or packing, may be more suitable, depending on the individual circumstance.

All of these case studies had the common element of reducing the amount of butane and, hence, the vapor pressure of the gasoline blending pool. This is a common requirement in today’s refineries.

Sometimes the refinery goals can be met by judicious adjustment of operating parameters. Other times, equipment maintenance or new equipment may be required.

Operations and engineering reviews can provide options and solutions when new requirements or operating problems arise. There is no one right answer for all cases.

Joseph Musumeci is a consultant with Ascent Engineering. Previously he was vice-president of MPEC Inc. and worked as a process engineer for Amoco Oil Co. He has a BS in chemical engineering from Texas A&M University. He is a registered professional engineer in Texas. He is also a pilot.

Want to find out more?

Contact a member of our team for more information.

We design and optimize the processes that maximize your plant's productivity with solutions that fit your needs.